FlatsMafia: Reeling in Hilarity
If you see a couple of firemen, some business magnates and a nurse cruising around Tampa Bay with their hair on fire like it’s the funniest thing in the world, get out your autograph books and chase them down. You’ve just witnessed Florida’s newest reality TV stars doing what they do best: having an awesome time. You’re invited to join them by catching their radio show on 102.5 The Bone, watching their 30 minute cable show on Fox Sun Sports or streaming their latest fishing antics.

“It’s Not Technical, It’s Entertainment.”
Unlike other sport fishing reality shows, this one is completely and utterly unscripted. If they haul in half a bay full of fish you’ll see them struggle to keep afloat on their way to the nearest grill. If they don’t catch squat you’ll see them pelt each other with Doritos and get pretty cheesy. As CEO and Founder James Garrison (a.k.a. Dad) points out, “it’s completely unscripted, 100% real reality TV.” You won’t see a director, gaffer or stunt coordinator anywhere.

What happens happens, and they’ve got video to prove it.

No Rules, Just Fun
Most sport fishing shows are all about technique and showing you how skilled they are so you’d better take notes. Not reel fun. Well, the Flats Mafia doesn’t judge. They just toss you a beer and say “watch this.” You won’t see anyone piously and relentlessly promoting paid placements just because they wrote us a check. We’ll show you the products we tested and love and how we use it in real time. We won’t tell you it’s the only way to do it. Everybody has their tricks of the trade and we highlight ours with wild abandon. It isn’t a teaching show but rather a full-throttle episode of vicarious fun with your craziest buds. 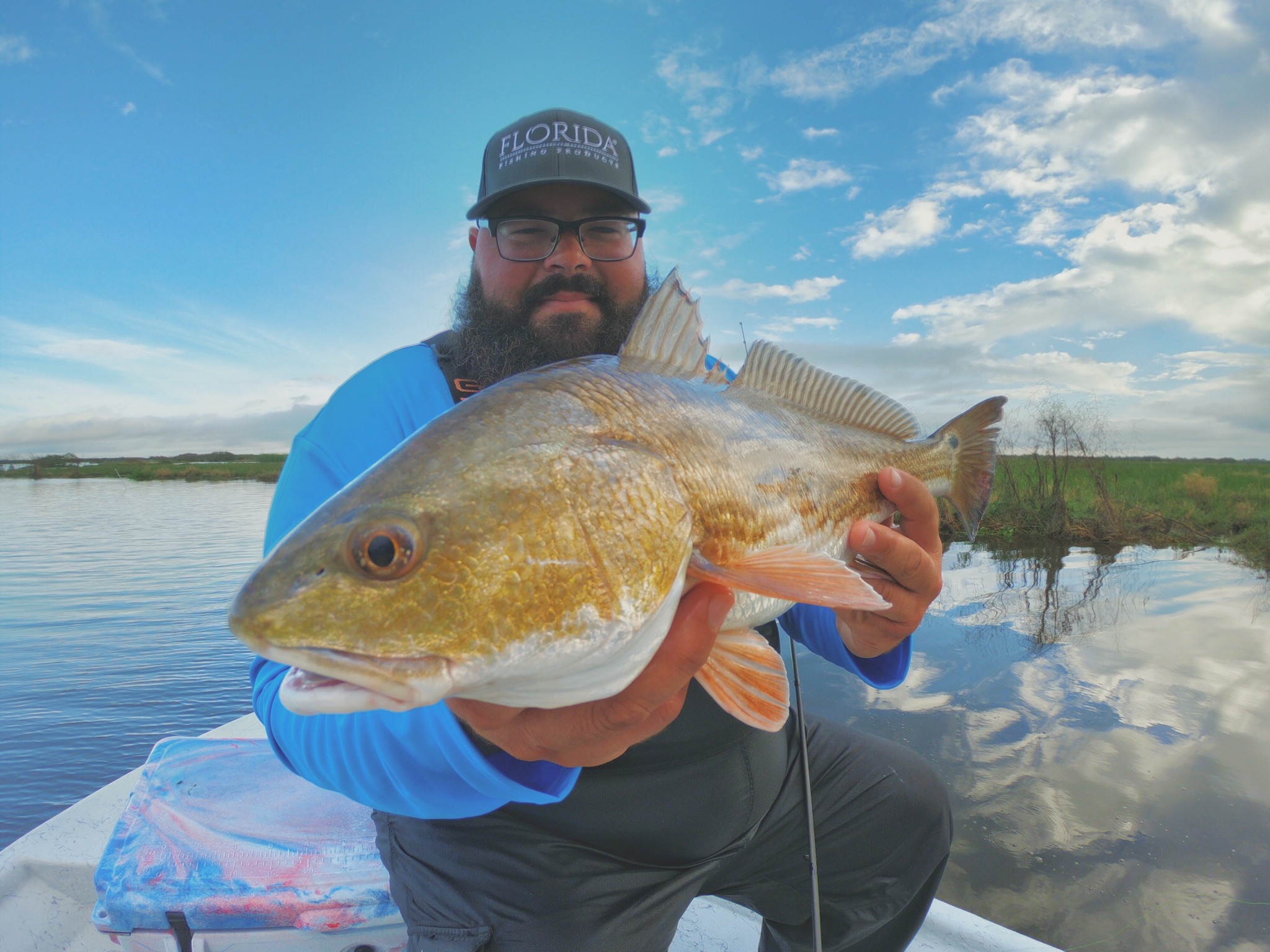 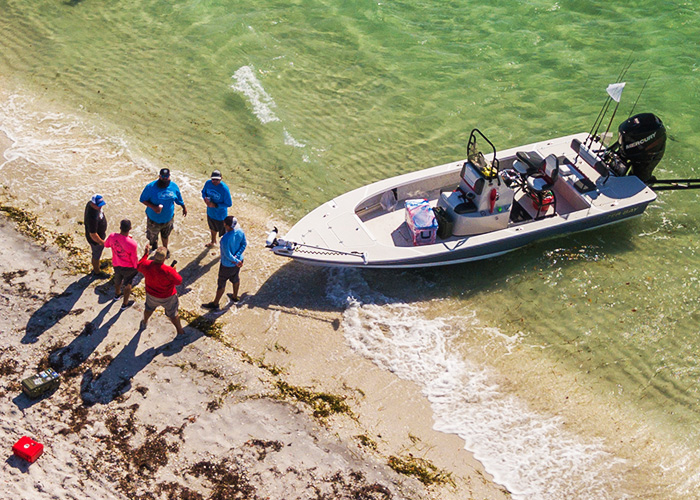 Tampa Kid Goes Fishing, Let’s Get Hooked
Flats Mafia CEO James grew up in Tampa, an area rumored to be a favorite of local “Goodfellas.” This may or may not have given him his penchant for mob movies but there’s no doubt it influenced his choice of the company name. Being a kid in Florida he was also outside enjoying the sunshine more often than not. One day his dad took him fishing and it was he who got hooked. He recalls “going fishing as a kid is lifechanging. It becomes part of who you are, creating deeply-rooted memories.”

A Water-Soaked Adrenaline Fest
James describes fishing as basically hunting in water. “When you roll up on a bunch of fish your heart starts beating faster; you’re jacked up on adrenaline. There’s nothing else like it.” The fact that he’s doing it in the sparkling waters of Tampa Bay doesn’t suck either. When asked why fish should fear him he simply grins and says matter-of-factly, “they better. ‘Cause I’m gonna get’em.”

The Sticker that Launched an Empire
When James and childhood fishing buddy Jeff began competing in local fishing tournaments, he coined the name Flats Mafia as a wry reference to his old stomping grounds. His girlfriend, who later became his bride, made a crappy sticker with Flats Mafia on it and James threw it on the back of his truck without giving it a second thought. People loved the sticker and the name and wanted to buy a sticker for their trucks, too. Being a red-blooded American in the good ‘ole US of A; James decided to oblige these potential customers as a side hustle.

T-Shirts are Hard
After his sticker success James decided to branch out into printed t-shirts. He quickly learned it’s a brutal business not unlike swimming with sharks. He got bit by a bad supplier and ended up selling less than stellar quality t’s from the back of his truck just to get rid of them. Little did he realize, no matter how crappy your t-shirt is people still read what’s on the front of it. He got more notoriety than he ever thought possible and local fishing legend Flats Mafia was born.

Let’s Do Something Easy Like Radio
Wanting to capitalize on this regional fame and strike while the iron is hot, the Flats Mafia founders thought what better way than a crazy radio show. They hit the mother lode with local talent Ryan “Bubba” Betancourt. His infectious insanity on the radio show whipped up the Flats Mafia excitement into a full-on feeding frenzy. Bubba soon had fishermen and people who don’t know what a pole is listening to his uproarious antics. The legend grew.

Puttin’ the Crew Together
Now with a solid fan following, Flats Mafia added new crew members Justin, Paige and Troy to the crew and launched their own “fishin’ with the buds” reality TV show. Every week the crew members cast off their everyday identities of firemen, business suits and nurse to don superhero capes of fishing awesomeness; giving viewers the superlative experience of “basically goin’ where we wanna go, findin’ fish to mess with.”

*For all animal lovers reading this it should be duly noted that no stunt fish are currently employed by the program and the majority of the crew practice catch and release.

Keep Comin’ with the Right Bait
With a successful TV reality show under their tackle belts, what will the Flats Mafia get up to next? Possibly new crew members, maybe a dog…”we won’t really know until it happens,” James says. “But I’m thinking really big,” he adds, flashing the knowing grin of a guy who knows what’s coming and you’ll just have to tune in and find out. As visions of global TV dominance dance in his head, we’ll have to do just that. 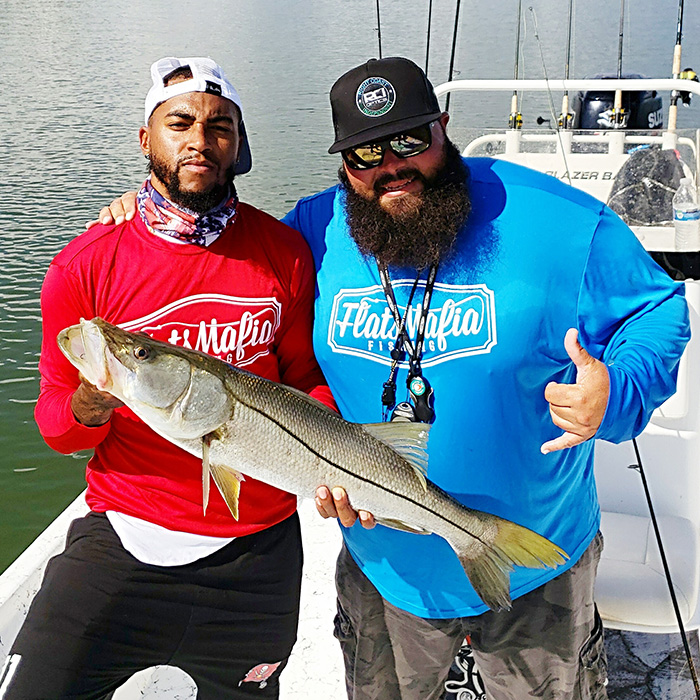 All apparel is available for purchase at West Coast Marine, if you would like to pick up your merchandise locally to avoid shipping. Dismiss